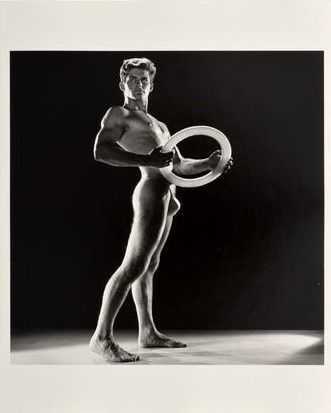 American (1909-1974)
Bruce of Los Angeles (1909-1974) Bruce Bellas, better known by his pseudonym Bruce of Los Angeles, was an influential and pioneering photographer of physique and beefcake imagery. Born in Nebraska, Bellas had been photographing men in his home state for some time before legal trouble prompted his relocation to the West Coast in 1947. There, Bellas made a name for himself photographing the California bodybuilding scene. With newfound success, he was able to open a studio in 1948 and later publish the magazine “The Male Figure.” Physique magazines of the mid-twentieth century, like “The Male Figure,” were often a youth’s first introduction to gay culture and wider community of men attracted to men. Harsh censorship laws at the time placed such periodicals at the forefront of the nascent gay rights movement, fostering activism not only from the magazines themselves but also dedicated readers who had found community within their pages. Photographers and beefcake entrepreneurs like Bellas whose work documented gay life at the time were integral to the early fight for open expression of non-heteronormative sexuality. As an artist, Bellas was prolific and photographed a variety of models throughout his career, creating a visual chronicle of the men of his generation. His masterfully crafted photographs, displaying a refined aesthetic and classical references, would later prove highly influential to major photographers including Robert Mapplethorpe, Herb Ritts, and Bruce Weber. Bruce of Los Angeles’ body of work documented and celebrated the male nude at a time when it was professionally and personally dangerous to do so. Beautiful and titillating, his photographs are historically noteworthy as both pioneering art and early activism.

[Nude with Disk]
by Bruce of Los Angeles

[Nude Posing with a Column]
by Bruce of Los Angeles

[Nude with Fishing Net]
by Bruce of Los Angeles