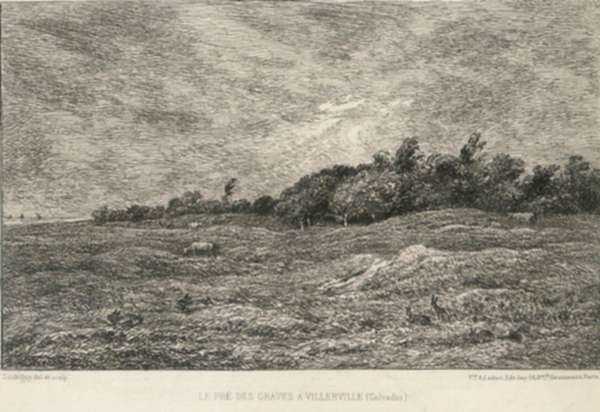 French (1817-1878)
Charles-François Daubigny was born in 1817 in Paris, the son of a landscape painter. Sickly as a child, he was raised by a nurse in the village of Valmondois on the Oise River. Self-educated, since he was too poor to enter one of the teaching studios, he eked out a living in his teens with illustrative work for publishers and gained painting experience as a picture restorer. On his own, he painted landscape sketches in the environs of Paris and in 1836 managed to visit Italy. In the following year he failed in his try at the Rome Prize for Historical Landscape but in 1838 saw his modern View of Notre Dame and the Ile Saint-Louis admitted to the Salon. After a submission to the Salon of 1840 was also accepted, Daubigny felt encouraged to make a second attempt at the Rome Prize in 1841, but failed again. A brief period of study with the eclectic history painter Paul Delaroche (1797-1856) left no trace in his work. He meanwhile continued to work as an etcher and illustrator in the publishing trade but by 1843 was also painting in the area of Fontainebleau. A small inheritance in 1848 gave him the freedom to travel. About this time, he became acquainted with the painters of Barbizon, Jules Dupré (1811-1889), Théodore Rousseau (1812-1867), and Alexandre-Gabriel Decamps (I803-1860). A first encounter in 1849 led to his lasting friendship with Jean-Baptiste-Camille Corot (1796-1875) whom he found to be the most congenial among contemporary landscape painters. Together they went sketching in the region of Geneva in 1852 and 1853, and in 1854 painted at Optevoz, near Lyon, where they were joined by Gustave Courbet (1819-1877). A regular exhibitor at the Paris Salons in the 1840s, and winner of first-class medals in 1848, 1852, 1857, and 1859, Daubigny won an important public success at the Universal Exposition of 1855. Not long after, he bought the barge Le Botin, which, outfitted as a studio, carried him on sketching tours along the Seine and more particularly the Oise, the shores of which became his favorite painting ground and, after the purchase of a property at Auvers in 1860, his home. As a member of the Salon juries of 1866 and 1867, Daubigny defended the young impressionists whose work his own foreshadowed more directly than that of any other landscape painters of the time. Visits to England in 1865 and 1866, to Spain in 1868, and to Holland in 1870 enlarged his horizon. While sheltering in England during the Franco-Prussian War of 1870, he was able to assist Claude Monet (1840-1926), a fellow refugee, by recommending him to his dealer Paul Durand-Ruel, who in the following decades became a tireless promoter of the impressionists. A painful arthritis gradually lessened Daubigny’s productivity in his last years. He died in Paris in 1878, at sixty-one. Rather than the forests of Fontainebleau or Compiègne, his favorite landscapes were the riverine plains of the Oise, with their luminous skies and humid atmospheres. Among the painters commonly grouped with the masters of Barbizon, Daubigny was the one most open to immediate visual experience and the least given to stereotypes and repetitions, in effect the one truly deserving to be called a naturalist. Bibliographic References • Laran, Jean. Daubigny. Paris, 1913. • Moreau-Nélaton, Etienne. Daubigny raconté par lui-même. Paris, 1925. • Fidell-Beaufort, Madeleine, and Janine Bailly-Herzberg. Daubigny. Paris, 1975. • Hellebranth, Robert. Charles-François Daubigny, 1817-1878. Morges, 1976. • Eitner, Lorenz. French Paintings of the Nineteenth Century, Part I: Before Impressionism. The Collections of the National Gallery of Art Systematic Catalogue. Washington, D.C., 2000: 145-146. Biography courtesy of the National Gallery of Art, Washington DC.