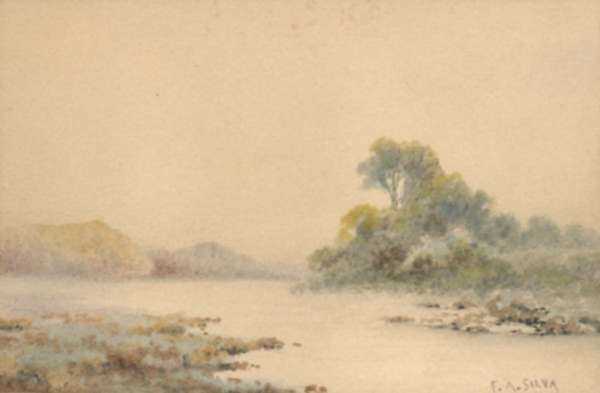 1835-1886
Francis A. Silva was born on October 4, 1835 in New York City and died March 31, 1886. He was one of two children born to Francis John Silva (little is known about his mother except that she was born in New York). As a schoolboy, Silva exhibited pen drawings at the American Institute. Silva’s parents, however, did not want him to pursue art as a career, so he apprenticed to several trades before ending up with a sign painter. He worked in that trade until the outbreak of the Civil War in 1861. Silva wouldn’t begin his art career until after service in the Seventh Regiment of the New York State Militia during the Civil War. Advancing from lieutenant to captain, Silva was soon stricken with “miasmatic disease.” He was dishonorably discharged for desertion when he left his regiment, but was soon reinstated. In 1868, Silva would marry Margaret A. Watts in Keyport, New Jersey. His debut as a painter was at the National Academy of Design’s annual exhibition of 1868-1869. Silva developed a reputation as a marine painter. He became known for exaggerating and intensifying natural effects of light and air for poetic purposes. His subtle manipulation of light and atmosphere was an aesthetic device that transcended naturalism and became an almost abstract means of expressing sentiment. Silva became known as one of the leaders in the American Luminist movement. By 1870, Silva had evolved from a self-taught artist, to one with a remarkably skillful technique and a repertoire of marine subject and atmospheric effects that varied little for the rest of his life. “We have few artists who are so accurate in drawing or so conscientious in the rendering of detail,” an Art Journal critic wrote in 1880. His luminous technique led to his election to the American Water Color Society in 1872. Just before he died in 1886, Silva painted A Summer Afternoon at Long Branch (1885, National Gallery of Art), considered his masterpiece. MEMBERSHIPS: American Water Color Society PUBLIC COLLECTIONS: Broad Street Trust, Boston Brooklyn Museum National Gallery of Art, Washington, D.C. Peabody Essex Museum, Salem, Massachusetts