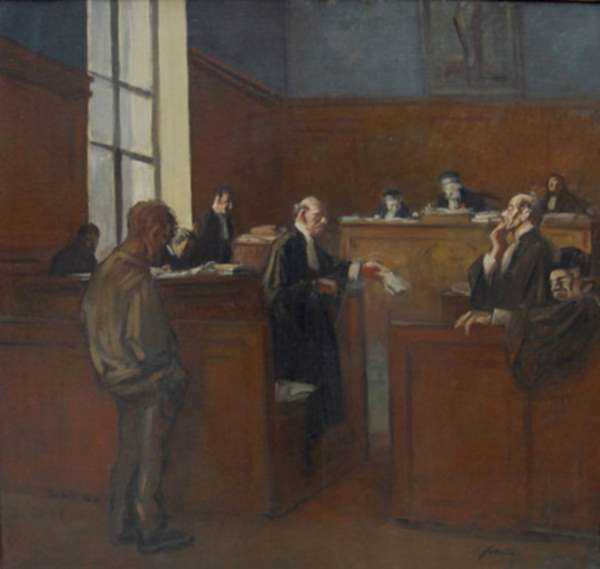 French (1852-1931)
Jean-Louis Forain, French (1852-1931) After an extraordinary career from the 1870s to 1894 working in Paris in the Impressionist style and in the subjects of “Gay Paris”, Forain turned his attention to the more serious matters of the French Law courts and biblical and devotional subjects. As Sinclair Hitchings wrote in 1979 in Jean-Louis Forain: Works From New England Collections, “Forain was influenced by Manet at this time [c. 1876] and met with him and Degas and the Impressionist group at the Café de la Nouvelle Athènes at the Place Pigalle. The group included Manet, Degas, Renoir, Pisarro, Sisley, Desboutin, Raffaëlli, and occasionally Monet and Cezanne and the writers Duranty, Silvestre, Burty, Villiers de l’Isle Adam, Ary Renan, and George Moore. Manet’s interest in scenes of contemporary life and his depiction of women influenced Forain’s style in painting and printmaking by reinforcing Forain’s natural interest in representing café life and showing the subject matter of contemporary women in contemporary settings.” “The most important friendship formed in this Impressionist period in Forain’s career was with Edgar Degas (1834-1917). Forain admired Degas greatly as an artist and also as a person. There is no question that Forain’s life and art were influenced. Degas asknowledged the closeness of the relationship when he presumed that Forain would be asked to be the speaker at his funeral, and told him that if he must give an oration, to say “Degas loved drawing and so do I” and sit down.” Degas also acknowledged the closeness of their styles when he said “He paints with his hands in my pockets”. But Degas also collected Forain’s drawings (14) and owned one painting, The Tribunal of 1902-3 (in the collection of the Tate Gallery, London since 1918). Forain’s later paintings develop from several events in his life. In 1891 he married the painter Jeanne Bosc and his son was born in 1895. He became a householder and left behind the Bohemian ways of his earlier years. Nightlife and the demi-monde were no longer subjects in his work, although café scenes and theater pictures still appeared. He made much of his income in the middle 1890s from newspaper and magazine illustration when the second great event occurred that moved him. He became involved in the court drama of the Dreyfus Affair. Although he was on the side of the army in his views, he was passionate in his approach to the artistry of courtroom drama. His interest in the courts piqued, Forain continued to explore the subject of justice in the French courts as his style underwent a change. This resulted in works such as A Plea For Mercy. Certainly he would have known the court paintings of Honoré Daumier, and there is no doubt some influence taken from Daumier in palette, style and composition, but Forain paints on a scale almost unknown in Daumier and gives his tribunal works a larger-than-life force. Hitchings wrote: “although Forain’s subject matter of the courts is similar to Daumier’s, his approach to that subject matter is somewhat different. Forain was not primarily interested in exposing the court for political reasons nor in ridiculing the venality and hypocrisy of the lawyers as Daumier did. Forain’s point of view of the law court was to show ordinary people caught up in a complicated system of justice. He was interested in the human beings subjected to a cumbersome and impersonal legal system. Forain presented the figures in the courts, even the indifferent or scheming lawyers and the bored judges, as human beings. He did not distort features or caricature for heightened effect, as is evident in Daumier’s figures of lawyers and judges. Forain’s indictment of the law system is ultimately as scathing as Daumier’s but it is less obvious. His representation of the law courts is related to his concern for social justice and also to the other major influence in his paintings and prints after 1900, his religious motivation… Forain relished the drama of the courts and the histrionic talents of the lawyers.” Hitchings says of the technique of these works, “In his painting he turned away from the colorful palette and technique of his Impressionist works. The colors in his works became somber, mainly black, gray and brown, dramatically illuminated by a chiaroscuro effect of light and an occasional vivid dash of bright color. Some of these works seem to be grisailles because of the reduced colors Forain allowed himself.”

French (1852-1931)
Scene de Tribunal, c.1910
Oil on canvas
25×31 IN.
Price Upon Request
Save for LaterRemove from Saved List
Save for Later
READ FULL DETAILS ON ITEM PAGE

A Plea for Mercy
by Jean-Louis Forain