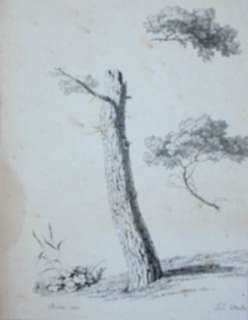 1775-1842
Jean-Victor Bertin, accepted into the French Royal Academy at the age of eighteen and exhibiting in the Salon from 1793 until his death in 1842, was recognized as one of the premiere historic landscape painters during the nineteenth century. Throughout his career, many of his paintings were purchased by the state; originally for official residences and later, under the Restoration, for country museums. In 1822, he was inducted into la Légion d’honneur (the Legion of Honor). Under the tutelage of Pierre-Henri de Valenciennes (1750-1819), Bertin created idealized landscapes in the traditional style of Poussin and Claude. Together Bertin and Valenciennes lobbied the Academy for the creation of a Prix de Rome for historical landscape painting, which was finally instituted in 1816. The award raised the status of historical landscape painting and fostered the education of many painters who painted outside and directly from nature. However, unlike these en plein air painters and his student Jean-Baptiste-Camille Corot (1796-1875), a member of the Barbizon School, Bertin remained true to the style of idealized and recomposed landscapes. He rendered scenes of Italy and the areas surrounding Paris in his studio and no oil study on paper of his is known. On the other hand, the lithographic studies of trees reproduced in the Notebook of Studies of Trees are evidence that Bertin valued working directly from nature. The studies, done in unusually large scale for the time period, are early examples in an emerging tradition of botanical studies and were most likely reproduced as references for his students and other artists. While in his oils Bertin remained loyal to traditional landscape style, his teaching paved the way for the revolution of method and ideology that defined the Barbizon School and the art of the next century.