American (1887-1953)
John Taylor Arms began his education at Princeton University. There he got involved with the engineering program, but after two years decided to transfer to MIT’s architecture program. He finished his education there in 1914 and continued to live a life most ordinary, with a wife and family following the war. He worked as an architect for many years and finally became a partner in his own architectural firm. His interest in etching began when his wife had bought him a kit to use as a hobby; this hobby soon turned into a passion, and Arms began etching his way through New York, focusing on the Brooklyn Bridge and cityscapes. After exhausting his interest in New York City scenes, Arms focused more interest on the other side of the Atlantic. He took many trips to Europe and completed series of gargoyles, French cathedrals, Italian cathedrals and Venetian cityscapes. The consistency within these works is found in their intricacy. Using great detail, Arms gave his audience the opportunity to draw intimacy from his works. Since his works are incredibly specific in depicting simple subjects—a gargoyle, a church, an alleyway—the viewer is comfortable looking at the print for a long period of time. The detail enhances the experience. Throughout his artistic life, Arms dedicated himself to educating the public and sparking interest in graphic design, specifically etching and printmaking. He was a member of many printmaking societies, serving as president of the American Society of Graphic Artists, and he held many workshops and lectures around the country. These efforts teaching definitely slowed Arms’ work rate, but he still created an impressive amount of quality works. His pieces vary in both subject and size, ranging from 5 x 7 millimeters to somewhat larger prints over twelve inches long. The combination of Arms’ attention to detail and philosophy made him a unique artist. The amount of detail in his etchings can be attributed to his educational background in architectural drawings. The painstaking style of etching he utilized is difficult to master, but once developed produces prints that are believable mainly because of the exactness of the artist’s perspective. So many artists are concerned with either making sure that they are being true to the form or their emotional attachment to the subject, but Arms chose a more holistic approach. He tried to bring together the spiritual and technical aspects of art. He sought to associate the physical structure of a building with the sensation a viewer felt standing in front of a massive structure. This cohesive style draws the viewer’s eye to examine an Arms piece from multiple perspectives, creating a connection not often evoked by similar subjects as depicted by lesser artists.

Basilica of the Madeline, Vézelay, or The Abbey Church of Ste. Madeleine
by John Taylor Arms 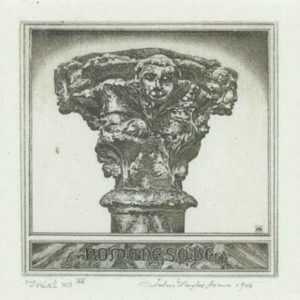 In Memory–Halloran Hospital, Staten Island or In Memory, England
by John Taylor Arms

The Church of Saint Francis and the Natizone, Cividale
by John Taylor Arms