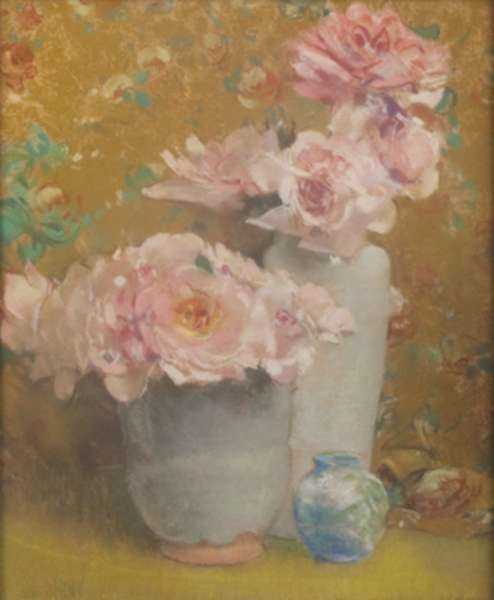 American (1859-1952)
Laura Hills began exhibiting floral pastels as early as 1889 at the Gallery of J. Eastman Chase, Boston. Early in her career, she was particularly well known for her miniatures, but as the market for these gradually slackened, she concentrated increasingly on her “portraits of flowers”. Her success with these works was readily recognized in her own day as is demonstrated by her astonishing sales records. She was consistently and speedily supported by Boston art galleries and patrons. Even throughout the Depression years, the floral pastels sold for between $100 and $500. Laura Hills was born in Newburyport, Massachusetts in 1859. Although she was known for her miniature painting, she was also interested in pastels at a very early stage of her career. In her advanced years, she took this early interest and worked with pastels and flowers to paint her oft-spoken desire to create “portraits of flowers”. Miss Hills began her artistic studies with Helen Mary Knowlton, William Morris Hunt’s most important student. She then studied at the Cowles Art School and the Art Students League with William Merrit Chase. She was awarded medals of honor at the Paris Exposition (1900), the St. Louis Exposition (1904), the Panama-Pacific Exposition (1915), and the Pennsylvania Society of Painters (1916). In 1899, she helped to found the American Society of Miniature Painters and became its first vice president. She was also a member of the Woman’s Art Club and an Associate Member of the National Academy of Design. Miss Hills exhibited regularly at Dolls and Richards, the Copley Gallery and the Guild of Boston Artists. These shows were well known for their speedy “sell-outs”. Her works were also shown at the National Academy of Design, the Pennsylvania Society of Miniature Painters, and the Boston Society of Arts and Crafts. The artist continued to exhibit new works through 1947 at the age of eighty-eight. The works of Laura Hills are found in many public and private collections including the Boston Museum of Fine Arts. The artist was well represented in “The Bostonians: Painters of an Elegant Age, 1870-1930,” which traveled from the Boston Museum of Fine Arts to the Denver Art Museum and the Terra Museum of American Art, Chicago.