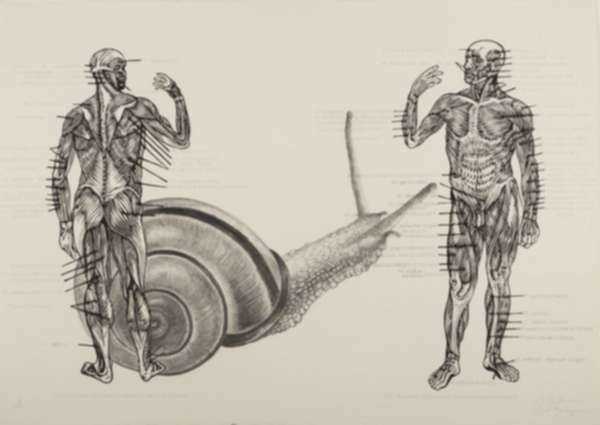 Cuban (b. 1980)
Osmeivy Ortega Pacheco, born in 1980 in Havana, Cuba, is one of the island’s great emerging printmakers. Having balanced art and academic studies as he made his way through college, Ortega was following the professional path of becoming a lawyer. Once he finally was forced to choose between dedicating his life to law or to art, Ortega abandoned the four years of law school and threw himself into his art classes. After studying at the Manero Workshop, Ortega graduated in 2003 from the San Alejandro Academy of Fine Arts in Havana. He was hired as a professor from his alma mater and has taught there intermittently since 2003. Ortega received an award of Honorable Mention from the Tamarind Institute of the University of New México 2004, and a Special Mention at the 10th La Joven Estampa Prize in 2009. His artwork has enabled Ortega to travel outside of Cuba to Europe and North America. After traveling and seeing the advance in technology within the art-world of different techniques, Ortega said that he thought learning about these new techniques would “destroy his concepts” especially within printmaking, he made a conscious decision to remain true to the traditional techniques. 1 He uses the traditional techniques to convey his principles and ideas about his art. One can see the direct influence of Durer in his woodcuts, and of Michelangelo in his anatomical studies. His textures are exquisitely rendered, and stark in their simplicity Ortega often uses common materials to express the culture of his surroundings. What started in Cuba as using different media due to necessity became an adapted practice when traveling abroad as a means of incorporating the environment in his art. In Havana, where paper is often scarce and expensive, Ortega would print onto rags that had been used for cleaning. When he spent time in Sweden as an exchange artist, he used more expensive materials to reflect a commercialization of human contact; Ortega explains that when he walked down the street, “no one would make eye contact,” as the Swedes preferred to isolate themselves with cell phones and other technology.2 Ortega insists that his work rarely addresses politics directly, and instead focuses on social issues. However, it is difficult not to read into the stark imagery of his works, such as “Paisaje” which depicts a group of turkeys behind a chain-link fence. Ortega often uses animals within the lexicon of his iconography. Another animal that appears frequently are zebras, which point to Cuba’s African heritage.3 Whether or not he is making a conscious political statement, it is through these social prisms that one gleans feeling of being on the outside looking in. While his work has been exhibited extensively in Cuba, including at the tenth and eleventh Havana Biennales, the Cleveland Institute of Art, the London Print Studio, and in Sweden, Mexico, Panama, his work is still relatively undiscovered in the United States. Childs Gallery is pleased to introduce this talented young artist to a wider American audience. 1. Interview with David Hart, Cleveland Institute of Art, March 29, 2012. http://www.youtube.com/watch?v=rRb-oX4FNQo 2. “CIA brings 5 Cuban artists to Cleveland,” Arooj Ashraf, La Prensa, December 16, 2011. http://arooj.wordpress.com/2011/12/16/cia-brings-5-cuban-artists-to-cleveland/ 3. “Cuban artists bring perspective of their homeland via Cleveland Institute of Art’s ‘The Cuba Project’”, December 12, 2011. RepeatingIslands.com