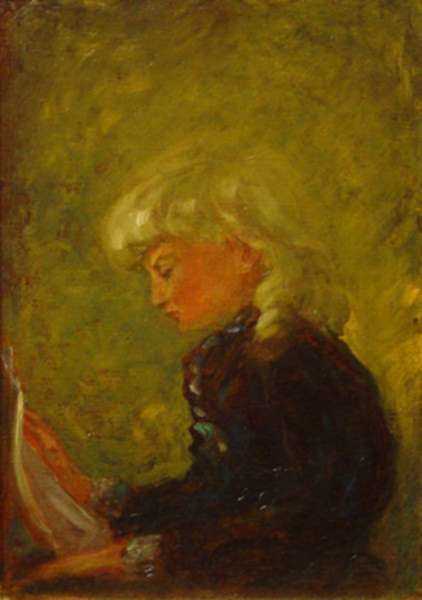 American (1850-1915)
Otto Heinigke, American (1850-1915) Otto Heinigke was one of three generations of Heinigkes to paint in the United States. Although many standard works give his birth as 1851, the family gives his birthday as September 24, 1850 and his death at his house in Bay Ridge, Brooklyn, N.Y., on July 1, 1915. A first generation American, the young Otto Heinigke was schooled in the all the traditional methods of art. His father, trained in Germany as miniature painter, surely influenced his son’s vocation. After studying at the Brooklyn Polytechnic Institute, Heinigke took up easel painting, intending it to be his life work. However, upon his father’s death, he assumed the senior Heinigke’s design position at the Hartford Carpet Company. He never wholly gave up his hope of someday returning to a career in painting pictures, and much of his leisure time was devoted to painting nature and still life. In the early 1880s he joined the firm of Roger Riordan, a stained glass window maker successfully competing with the popular Munich painted windows. He was deeply influenced as a painter and glass designer by John La Farge. In 1890 he formed his own stained-glass studio with Owen J. Bowen, a former associate of both Tiffany and La Farge. In a short time, Heinigke and Bowen numbered among its clients the pre-eminent architects of the day; producing scores of stained glass windows cycles and mosaic tile floors and ceilings for some of the most important buildings at the turn of the century. Upon Heinigke’s death, his son Otto Weir Heinigke continued the firm as Heinigke and Smith, and it enjoyed comparable success until its ultimate demise in the mid-1950s. While the still life and landscape paintings of Heinigke are notable in their own right, we are particularly interested in Heinigke’s position as a stained glass artist practicing at the turn of the century, since he is now considered as one of the prominent leaders in the stained glass revival movement in America during the late 1880’s to early 1900’s. As a devout catholic, Otto made pilgrimages to England, France and Italy in 1896 and 1910. During these travels, he broadened his appreciation of traditional methods and materials of the decorative arts. He was profoundly influenced by the medieval stained glass of the great European cathedrals, particularly those of France. Heinigke’s style of stained glass window making is unique as he was the one of the first to combine the traditional European stained glass technique of painted pot metal glass with that of the contemporary opalescent, or Tiffany glass. As his son Otto Weir states, the travel abroad moved Heinigke to “renew his already active leadership in a return to the use of the painted pot metal method of producing windows.” In addition, “his profound study of the use of the lead line in opalescent window design assisted him in developing a fresh and personal style which embodied the best that was in both schools.” It is this personal style of Heinigke’s that made an indelible mark on the history of American stained glass. Otto Heinigke’s landscape and still life paintings were exhibited at the Pennsylvania Academy of Fine Art in 1881 and 1896-97. The stained glass windows of Heinigke and Bowen and Heinigke and Smith can be found in the buildings of Ralph Adams Cram, Cass Gilbert, James Renwick, John Russell Pope, York and Sawyer and McKim, Mead and White, to name just a few. Some significant commissions include the stained glass windows for the J. Alden Weir Memorial Window at the Church of the Ascension in NYC, the Sporting Window at the Cathedral of St. John the Divine in NYC, the window cycles at Library of Congress in Washington, DC.

[The Field at Dusk]
by Otto Heinigke

A Merry Xmas
by Otto Heinigke