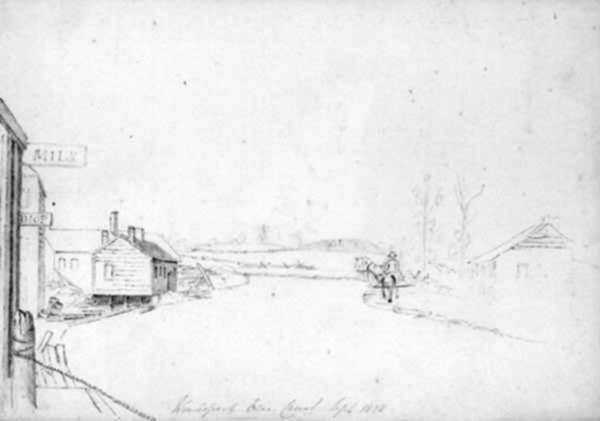 British (1799-1857)
Sir Henry William Barnard, British (1799-1857) Barnard made an extensive trip throughout Quebec, Ontario, New York State, New Hampshire and Boston in 1838-1839 following his duties in Canada, as a British officer during the Rebellion of 1837-1838. His work is included in the permanent collections of the Royal Ontario Museum, the Public Archives of Canada, The Montreal Museum of Fine Arts, and the Sigmund Samuel Collection of the Royal Ontario Museum. The best discussion of his life and work appears in the catalogue of the Public Archives of Canada, Image of Canada: “Born in a family with strong Church of England affiliations, Barnard acquired an education at Westminster and later at Sandhurst. He obtained a commission in the Grenadier Guards in 1814 and was with the British troops in the occupation of Paris during the Napoleonic Wars. Achieving the rank of Captain by 1822, Barnard served in the West Indies and later in Canada with his battalion, frequently holding staff appointments during this period of his career. His Canadian service encompassed the events of 1837-1838 and later until 1842. The most significant portion of his career occurred after his Canadian posting when, on the accession of General Simpson to the position of chief command, Barnard became his Chief of Staff in Crimea. After various postings in England and abroad, in 1857 Barnard received an appointment to the staff in Bengal, where he was responsible for maintaining the British position during the Indian Rebellion of 1857. He fell, not in battle, but to cholera which was at this time moving through the British forces.” The Sigmund Samuel Canadiana Gallery of the Royal Ontario Museum possesses the largest collection of Barnard watercolors in Canada. His work covers the usual Niagara, Montreal, and Quebec subjects, but in addition there are some interesting views of the workings of the Erie Canal. For an image of Sir Henry in 1855, see this link to the George Eastman House. http://www.geh.org/fm/fenton/htmlsrc/m198112340013_ful.html

Niagara Falls from the Canadian Side
by Sir Henry William Barnard