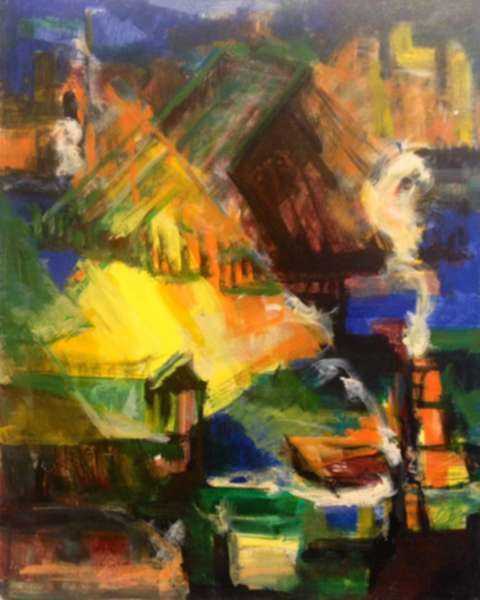 American (1908-1995)
TED DAVIS Born: New York City, NY 1908 Died: New York City, NY 1995 Louis Theodore “Ted” Davis began his study of art at the Cooper Union Institute in the late 1920s. During the 1930s, he was a student of John J. Newman. Following service in World War II, he used the GI Bill to study art in New York City. In the early 1950s he was a student of Hans Hoffman. From 1948 to 1992 he maintained studios in Manhattan and Monhegan Island, Maine. His work was exhibited in the Annual Exhibitions at the National Society of Painters in Casein, in which he won three awards including Patrons Prize (1957); the Twentieth Biennial International Exhibition at the Brooklyn Museum (1959); and the 29th Annual Mid-year Exhibition at the Butler Institute of American Art (1964). His work was featured in a one-man show at the Farnsworth Art Museum in Rockland, Maine, in 1997, and is illustrated in Monhegan: The Artists’ Island (1997). His paintings are featured in collections of the Portland Museum of Art, Portland, ME; the Farnsworth Art Museum, Rockland, ME; the Ogunquit Museum of American Art, Ogunquit, ME; the Olin Arts Center at Bates College, Lewiston, ME; and the Monhegan Museum, Monhegan Island, ME. Davis drew his inspiration from the frenetic energy of New York City where he painted the bustle of the East River, its dock and river traffic. Other favorite urban subjects were musicians, commuters, still lifes, and live models that inspired his lush nudes. For nearly fifty years Davis summered on Monhegan Island; he likened the island to a “big cruise ship.” It never went anywhere, but passengers and the atmospherics were constantly changing. From the late 1940s to the end of his life, Davis’ work became increasingly abstract, yet always it contained elements of the natural environment. The early work, influenced by Hans Hoffman’s “push-pull theory,” used Marinesque brush strokes to imply a setting, rather than utterly define it. Ultimately, these brush strokes resolved themselves into the blocks of color–a fish shack, a boat, and a buoy. From the 1960s to the 1990s he created prismatic layers of thin color, each layer overlapping and intersecting another. Was it the sun that shone through the center of these works? And then, of course, there were Davis’ beloved “boids”. The gulls of Monhegan ecame his other world, each one imbued with an identity–Reagan, the professor, the shy, and the scolding gull. For a man who lived the routine that Davis followed, the freedom that these gulls possessed fascinated him. Ted Davis was a beloved figure on the island. Many collectors and friends were devoted to his work and through him became educated to the world of modernism. His impromptu lectures on the artists and his insight into art will be remembered for decades. As a painter, his skill was summed up by the painter and The New Yorker cover illustrator, Charles E. Martin, who called him “the best watercolorist on the island!” WORKS CITED: Curtis, June and Will, and Frank Lieberman. Monhegan: The Artists’ Island. Camden, Maine: Down East Books, 1995. Deci, Ed. Personal Interview. August 2000. 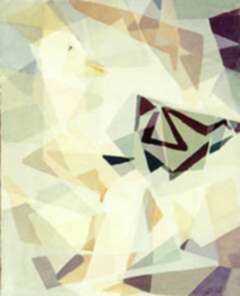 Cat with Butterfly
by Ted Davis 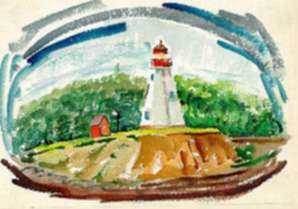 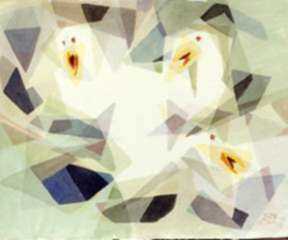 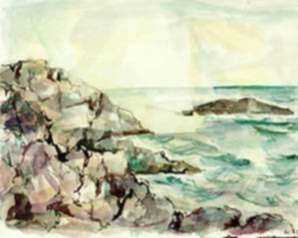