Sawool Kim’s surreal, dream-like paintings fuse cultural relics with flora, fauna, and everyday objects. Her latest body of work explores transcultural identity through the visual metaphor of botanical grafting, a horticultural technique whereby the shoot of one plant is joined to the stock of another to create new, hybrid growth. Like grafting, transcultural experience can be seen as a process of hybridization – as cultural contact which generates new cultural forms and meanings. Kim’s interest in transcultural identity is partly a reflection of her own experience; born in South Korea, she has lived and worked in Boston since 2013, graduating from the MFA program at the School of the Museum of Fine Arts in 2016. Her fantastical images are often born from lucid dreams and visual meditations in which objects reveal themselves in a manner not unlike a stream of consciousness narrative.  In recording these dreams and meditations, Kim creates a new “visual dictionary,” where seemingly unrelated objects are reclassified as belonging together. The resulting images not only have personal resonance for Kim, but also tap into a larger collective unconscious through the complex use of diverse, but recognizable imagery. Kim depicts cross-cultural hybridization as a visual grafting of cultural images. Her intricate and interwoven compositions combine relics of different cultures with objects from our own time, visually transplanting these images onto one another to create new meaning. Inspired by her recent travels to South America, the artist incorporates artifacts from Pre-Columbian cultures, including Nazca, Moche, and Chancay ceramics. Kim recontextualizes these artifacts by mentally removing them from their immediate surroundings and hypothesized use. In doing so, she gives each object a new role and function, through which they can then be interwoven with other pieces. Freed from any preconceived history, time, space, culture, and interpretation, Kim’s relics visually transform, merging with flora and fauna in new, unexpected, and incongruous ways to become pancultural totems of human experience. These couplings can be abrupt and absurd, mirroring the sometimes awkward process of navigating transcultural identity. At the same time, such novel juxtapositions celebrate the transformative power of cross-cultural exchange and the striking originality of hybrid identity, to the betterment of our global society. The artist will be present at the opening reception, held Thursday, September 6th, from 6 to 8pm.

Circulation of Inspiration
by Sawool Kim

Korean
Circulation of Inspiration, 2015
Acrylic on canvas
58×38 IN. 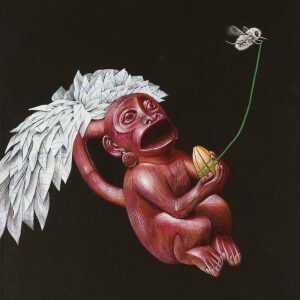 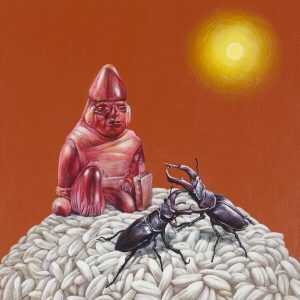