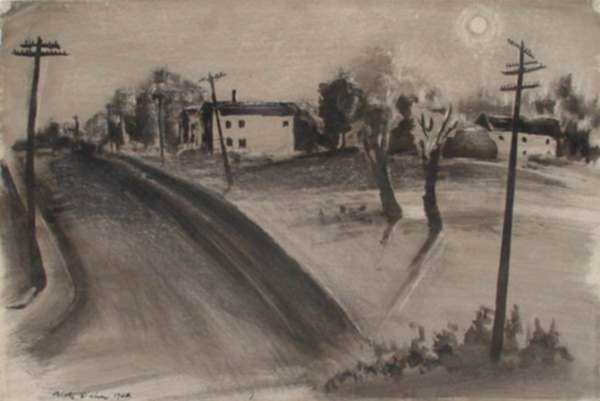 American (1895-1968)
Adolph Dehn was born in Waterville, Minnesota in 1895 to a mother who was a feminist, liberal, socialist member of the German Lutheran Evangelical Church and a father who was an atheist and anarchist. His art school training at theMinneapolis School of Art introduced him to life-long friends Wanda Gag, Harry Gottlieb, John Flannigan, Arnold Blanch, and Lucile Lundquist (Blanch)—all of them went to the Art Students League in New York in 1917. In 1920 Dehn was introduced by the master printer, George Miller, to lithography —which became his preferred medium. After a prolonged European tour from 1921 to 1929, Dehn returned to New York for the opening of an exhibition at the Weyhe Gallery curated by Carl Zigrosser. The exhibition was unusual for its content of 34 lithographs and 15 drawings rather than the more typical oil paintings, but sold well. As the Depression came upon the art world in the 1930s, Dehn formed the Adolph Dehn Print Club, participated in the American Artists Group, and was one of the first and most successful artists in the first year of Associated American Artists in 1934. From his early Minnesota subjects, Dehn became a world traveler. In 1939 he held a Guggenheim Fellowship that allowed him to travel to the Far West and Mexico. The following year he was appointed summer instructor at the Colorado Springs Fine Arts Center where he would return for many years. In 1944 he went to Venezuela and in 1948-49 to Key West, Florida, Cuba, and Haiti. Dehn represents the triumph of lithography in the middle of the 20th century and his prints reflect many of the movements in which he immersed himself and helped to build and define, including Regionalism, The American Scene, Social Realism, and caricature.

One Phase of Love
by Adolf Dehn

Ball of Fat
by Adolf Dehn

In the Moonlight
by Adolf Dehn

The Piece of String
by Adolf Dehn

Story of a Farm Girl
by Adolf Dehn