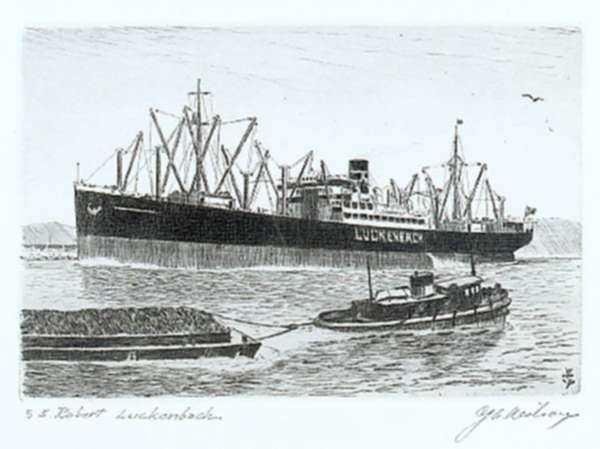 American (1880-1965)
Charles J. A. Wilson was born in 1880 in Glasgow, Scotland. He came to America as an infant and was raised in Newton, Massachusetts. Wilson was a member of the Boston Society of Printmakers, and exhibited with Pennsylvania Academy of the Fine Arts, Society of American Etchers and the Currier Gallery. Wilson was a prolific, self-taught, marine artist and he gained much of his experience from working in the Boston shipyards. He worked as an artist for Bethlehem Shipbuilding in East Boston, etching their ships from blueprints, and during World War II, Wilson worked in Boston as an official Coast Guard artist. Our extensive collection of Wilson prints includes such ships as the S.S. Antigua, the U.S.S. Michigan, the Benjamin Packard, the Argus and the Holly of Boston. Wilson’s works are in the collections of the Peabody Essex Museum (Salem, MA), the U.S.S. Constitution Museum (Boston), the Hart Nautical Museum at M.I.T., and the Penobscot Marine Museum in Searsport, Maine.

Dreadnought
by C. J. A. Wilson

Lightning
by C. J. A. Wilson

Gibraltar
by C. J. A. Wilson