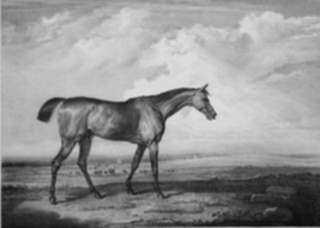 British (1769-1859)
James Ward was a skilled animal, landscape and portrait painter, as well as a renowned engraver and mezzotinter. Ward is most often remembered today as a painter of animals; his depictions of horses, cows and pigs make him, along with George Stubbs (1724-1806), one of the most highly regarded of the British animal painters. However, he also produced ambitious, large-scale landscapes, such as the sublime Gordale Scar (1812-14, Tate Gallery) and history paintings, like the gigantic Waterloo Allegory (1815-21, now lost). He exhibited works of all of the above-mentioned genres at the Royal Academy, of which he became a full member in 1811. He applied to the Royal Academy for a pension in 1847, but continued to exhibit until 1855 and worked right up to his death in November of 1859.

Dogs of the Dalmatian Breed
by James Ward