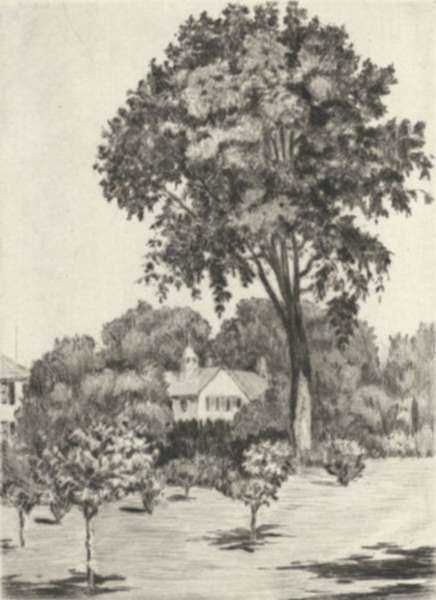 German-American (1885-1960)
Paul Lameyer, German-American (1885-1960) Paul Lameyer was born in Hanover, Germany October 30, 1885. He was educated at the Kaiser Wilhelm Gymnasium for thirteen years. He then spent five and one-half years at the Technology School in Munich where he gained a degree in engineering. He entered the German army where he served from 1906-1907 in the cavalry and infantry. He re-entered the German military in 1916 in the German air force through 1918. His family were wealthy Hanover jewelry merchants and supported Lameyer as an amateur on the international tennis circuit and he spent much of the 1920s in Italy. During 1922 he created a series of drawings of Venice which he later turned into etchings. He read and spoke German, French, Italian, and English. In 1926 the artist met Helen Hunt Ames of Newton, Massachusetts. He moved from Italy to Massachusetts in September of 1926 and married Ames in the same year. They had two children, Louise and Gordon. In 1927-1928 he worked for the Boston architectural firm of Cram and Ferguson on Boylston Street for $60.00 per week as a designer. He then moved to the firm of McInnis and Welch in the Statler Building in Boston in a similar post from 1928-1933 for $70.00 per week. While he was employed in Boston during these years, Lameyer also had an income from investments in Germany providing an additional $8,000 per year until his assets were frozen by the Nazi government in 1933. Documents filed by the F.B.I. during 1942 stated that Lameyer still had “approximately $100,000 invested in Germany.” After the freezing of these assets, Lameyer worked under his own name as a designer, draftsman, and printmaker. His principal output of etchings was from 1933-1941, and his entire body of printmaking may date from this period. During that period he earned an average of $1,500-$1,600 per year. On December 21, 1927 the Boston Evening Transcript reported that: Kilham, Perrin, Lameyer Display Water Colors at the Architectural Club Water colors are informally shown by three exhibitors at the Boston Architectural Club, 16 Somerset Street… Paul Lameyer undertakes detailed study of architectural bits, capitals, carvings, their introduction into dominant building schemes in other water colors as well as pen and ink drawings made abroad. There is an absence of titles, but surely the three studies framed as a triptych represent the time devastated wealth of the Roman Forum, while the bronze horse of St. Marks stands aloft in a study of Renaissance facades. Lameyer lived with his wife and children at 300 Highland Street, West Newton, Massachusetts from October 1927 until October 1938. He then moved to 248 Mt. Vernon Street, Newton from October 1938 to June 1941; 50 Gloucester Street in Boston from July to September 8, 1941; 353 Marlboro Street, Boston from September 1 – 20, 1941; 249 Marlboro Street, Boston from September 20 to Dec 8, 1941. Lameyer, a subject of investigations into wrongful internment of German citizens during WW II, was taken into custody by the F.B.I. at 249 Newbury Street in Boston on December 11, 1941 at 6:15 p.m. Since his loss of regular work and the ending of his German income in 1933 he had had less and less income to provide for his family. Apparently Helen Ames Lameyer did not prefer Paul poor. The action of the F.B.I. took place during a pending marriage separation action instituted by Mrs. Lameyer which Paul had apparently resisted – the couple never divorced. In affidavits Boston attorneys representing Mrs. Lameyer’s uncle, Major Ames of California, asserted that Mrs. Ames’ family had been supporting her and the children with as much as $20.00 per week and that Paul had refused to work. Furthermore the attorneys asserted that he was “definitely pro Nazi.” Lameyer was then interned in camps ranging from Massachusetts to Long Island, Tennessee, and North Dakota. On June 11, 1945 he was released from Ft. Lincoln, Bismark, North Dakota. Asked if he wished to be repatriated to Germany, he declined stating that his children were in the United States. His wife never gave his letters to their children during his imprisonment, returning them to him instead. He died in 1960. Official parole documents, issued at the end of the war, stated that Paul Lameyer was in fact never a Nazi. He had been the victim, like many WWII internees, of false testimony, exaggerated war hysteria, and the personal motives of those who gave testimony against him. The secret wartime tribunal system that imprisoned him lacked the checks and balances of due process normally associated with an open court and it took 3 and a half years for the facts to surface that ultimately lead to his parole. He made drawings in the camps in which he was interned that are among the most valuable visual resources that were made by internees of the conditions in those camps. We are grateful to Randy Houser, Paul Lameyer’s grandson, for bringing much of the material in this biography to our attention. The last paragraph was directly quoted from him.